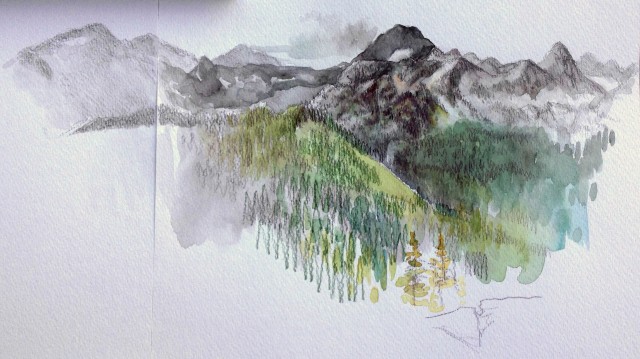 Our pass from the previous day entitled us to another trip up the mountain, so this time we drove straight to the top car park and took the shuttle to the summit. The views were absolutely mind blowing: I’ve been to Banff so I know what sublime looks like, but every mountain range has its own special magic. I drew this view of Mt Coursier from the Fridge, a cave that remains full of snow throughout the summer because the sun never reaches it. I don’t know if Mt Coursier was named after Isabel Coursier or one of her ancestors, but I think she deserves to have a mountain named after her. She broke a world ski-jumping record in 1920 at the age of 16 – in a sport that women were not encouraged to take part in, unless they held a man’s hand while they attempted the jump! Isabel was scornful of ski lifts, preferring to climb the mountain each time before she made her jumps, as a way to strengthen the leg muscles.

As you can see, I extended my drawing onto another piece of paper and was intending to draw more on the left, taking in Mt St Cyr and Mt Dickey, but I wisely focused on Mt Coursier. The only part of this picture that vaguely reflects what I saw during the whole time I drew this is the foreground and the range of smaller ridges in front of Mt Coursier. The background was constantly changing as the clouds shifted, so that different ranges became sometimes silhouettes, sometimes clearly defined rocky faces. I concluded that I should have done ten different small paintings instead of one. But I feel as though I walked those mountains during the two hours that I sat there watching them.

I was assaulted by squadrons of mosquitoes as I drew, but other wildlife was also about: a marmot ventured out of his den and posed for his picture, and a pika also came to have a look. The track that took us to the Fridge is called the First Footsteps Trail, and it’s dedicated to the First Nations peoples who lived in the Revelstoke area. 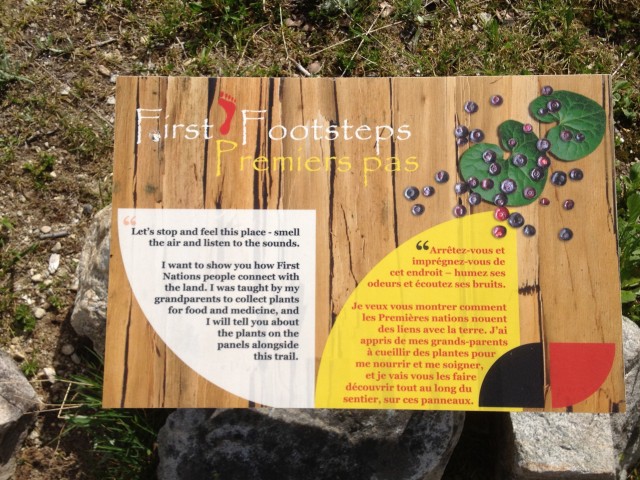